So I was feeling classy the other night and decided I wanted to rip some packs. I knew '12 Bowman Chrome (baseball) and '12-'13 UD Artifacts (my favourite annual hockey release) had come out recently, and I was curious. So I went to Target (classy, right? The lack of "local cards stores" around here is insufferable) and luckily (?) found blasters of Artifacts and Bowman Chrome (which also had $1/card loose packs, fffthat). Like a dumbass, I grabbed one of each and a stack of eight 2010 Topps Chrome marked down to $1.59per, hopefully curing my itch to rip for a few weeks (so far it has.)

I ripped through the Artifacts blaster quickly, even with the impossible-to-open packs snagging on the corner of every card. Usually I put the cards right back into the pack, but they posed a serious threat to the condition of the cards pretty much immediately and ripped to shreds incapable of holding cards in the future - so all forty cards went into a nice, clean, inky-smelling stack.

Initially I wasn't impressed. $Twenty, 40 cards, all base and one parallel. I knew what I was in for when reading the insertion ratios on the box - plus, it's retail. I've just had so much luck with Artifacts in the past, that this was kind of a gut-punch to end up with 40 base cards in my first one of this year.

Since then, I have sifted through the 39 going to complete my set many times.

They're beautiful. That's all there really is to say. 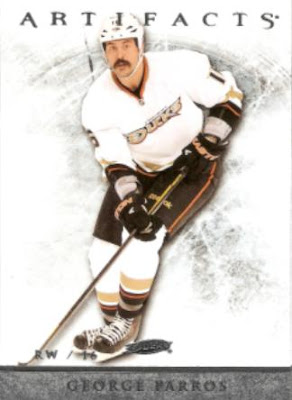 The cards scanned very brightly - but that's because there is a brilliant white background, with Artifact's trademarked skate-grooves-in-ice background. The background pattern is the same on every base card - and it would be nice to see this changed up a bit, but it is no deal-breaker.

The hatched foil is perfect. The team logo has a good deal of detail for being the size that it is, but the foil-name-on-foil-border makes it only readable from a certain angle. The checklist makes up for this, though - as you'll know most of the 100 players (both legends and active players by their picture. If you're a hockey fan, you'll recognize everyone in the set. The only name I had to look at out of the 39 bases was Cam Fowler. 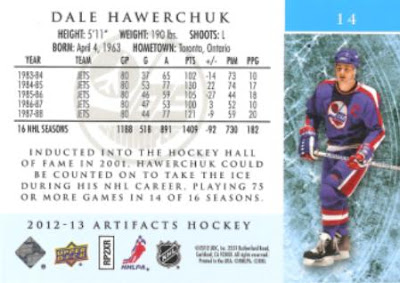 The backs are quite nice. Brilliant white behind six or less seasons and a subtle gray team logo in the background. Artifacts stays with the cool-blue feeling on all of the backs, and it works. 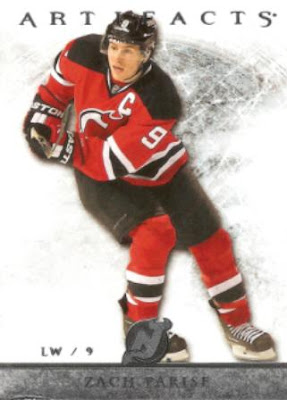 It's fitting that the first card I saw was Zach Parise...but I have serious issues with this card. First, it is damaged - look to the bottom left of the foil.

Second, Artifacts - according to Upper Deck's website - was released on September 24th. Zach Parise signed with the Minnesota Wild on July 4th (AMERICA!).

Yet, he is labeled as a Devil, still. I'm fine with him being pictured as one - but come on. Switch up that foil logo for me. I'm dying to see him on my Wild and the lockout isn't helping me out at all. 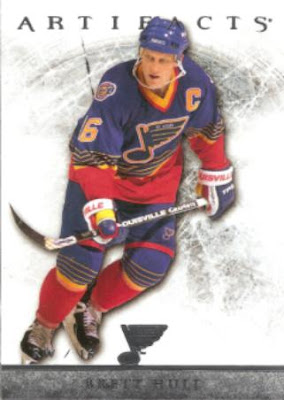 With the silver foil and gray-and-brilliant white background, the colours in the jerseys really pop in this set, as evidenced by this Brett Hull in the '90 Saint Louis Blues primary colour extravaganza.

But don't worry. In our colourful day-and-age, we haven't forgotten the archaic times: 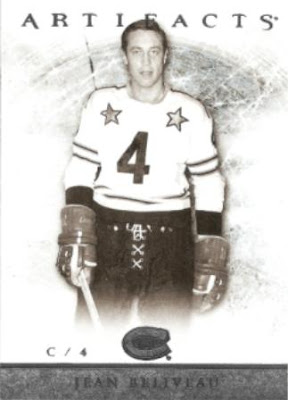 ...a beauty from the sixties. Something odd about the legends cards - some are pictured in All-Star jerseys (Jagr, Sakic) and some feature the players on their teams (Hull and Twist are wearing Blues sweaters, Coffey is pictured as a Penguin). This goes for active players, too - as I look through the set: Naslund and Selanne are all-stars, others are not. UD couldn't seem to make up their mind, or I've been short-printed and I don't know it. 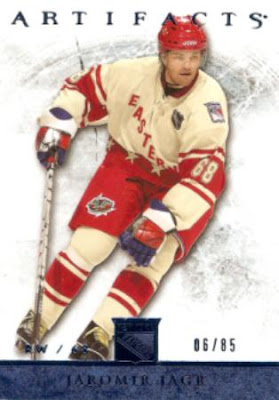 Well, it's close to a hit. These are relatively rare, and the blue looks great. Maybe because it's a Ranger card. I'm not a huge fan, or a fan at all, of Jagr. So it goes...I'll be looking for a  nice home for this one.

There are a lot fo pros to this set: great use of colours and lack of colours, a simple and classy design, well-executed foil, and a checklist full of household names. Okay, maybe a southern Ontario household.

However, there are some issues: the foil is easily damaged by the inflated-yet-suffocating foil packs, the emerald parallels look ghastly on all teams except the Stars and Wild and while the checklist is full of stars, at only 100 players it is difficult to inserts everyone's favourites - but you're saved from cards of blokes like Blake Geoffrion and Chris Butler.

Overall, I really enjoy this set. I'd like to purchase I nice hobby box and grab some of the hits, but I'm more interested in a nice binder set with these. There are some issues, but it's definitely worth it's retail price.