We were fourteen years old at the time. Maybe 13 depending on birthdays. The year was 2000. We were alive, young, stupid, and somehow found some change kicking around in our relatively poor, rural hideaway in Central New York.

We loved baseball, but cards were getting boring. Running $3 or so per pack, the industry had to show us something different to get our hard-earned birthday and Christmas monies (we were fourteen, of course we didn't have jobs.)

Then something new came along. Shiny. With pre-prima donna Alex Rodriguez is still-hot Seattle Mariners gear on the foil package. Sleeveless jerseys, the color teal. All of the rage, packaged into one ten-card pack. It was the golden age of shitty, over produced baseball cards, and the 2000 release of Skybox Metal led the way like a flamboyant Richard Simmons.

We chased the stuff like some illicit drug approve by our parents.

"The Nice-n-Easy by my house is out of it." James would say. "But the one on the way to Rome has a few left."

"Man, Fastrac by the high school has it. Have you checked there? But they're $3.50 each. We'll never get the whole set with all of these doubles."

We didn't know it then, but we were the kids in all of those 50's movies chasing Roger Maris cards for our bike spokes. Of course, you'd have to replace Roger Maris with Vladdy Guerrero and bike spokes with hard sleeves in our baseball bags (I still carry an Eric Gagne card to this day in mine...)

Of course, we thought we were different. Metal made us feel different. We didn't bother showing our dads the blasphemous cards inside - they'd never understand.

"Those aren't baseball cards! Why are they so shiny? What's that swirling pattern? Why isn't it flat?" They'd lose themselves in memories of clean-cut Mickey Mantle gazing into the distance of a Spring Training like the idol he was. Flimsy stock, rounded corners, creases everywhere but the face. The rubber band indents. "..and they only cost $.15."

The cards have changed, but the chase remained. Three hundred cards in the base set and three friends chasing them through the whole county. Every Monday before study hall, we'd compare.

"Is that a Nomar Platinum Portraits?" "Yeah. You can have it."*

Who was chasing what, no one remembers. Except the ultimate goal. The World Series of our age 27 collecting season.

1:288 packs they fell. The stores would hold about 20 retail packs at a time. We never bothered calculating the odds of pulling one in - mostly because Doug was the only one good at math - but as optimistic as we were, we were realists. Poor teenagers with a bit too much time between baseball practice.

Metal stuck around the shelves of retail stores for about a year. There was no 2001 Skybox Metal - likely because us idiots couldn't sustain the truly awful set contributing $3 a week to a rapidly-ebbing industry. We didn't know any better. We also didn't have ebay accounts, debit card or bank statements - our only chances at completing the set and chasing the Ultimate Goal were ripping foil and begging for someone to drive us to card shows for a preposterous mark-up. The latter never happened, so we were stuck.

That summer, James and I were lucky enough to make the trek to Cooperstown for the induction of Kirby Puckett and Dave Winfield. My mom brought us down, along with a family friend (who was a big Kirby Puckett fan) and we camped out at a KOA well out of town, avoiding the fees of the Cooperstown hotels. The weekend was hot as hell and mostly uneventful, aside from a brief glimpse of the legendary Yogi Berra outside of Mickey's Place and James getting leveled by a souvenir seeker in the stands down the left field line of Doubleday Field - back when the Hall of Fame Game was still a thing.

Of course, that was until our last day, when sifting through the sleeves at Pioneer Cards, James tapped me on the shoulder and said "There's one here."

For the sake of poetic justice I knew just what he meant. Back to the front of the store we went, and there, in the bottom corner of a display case,it shined: 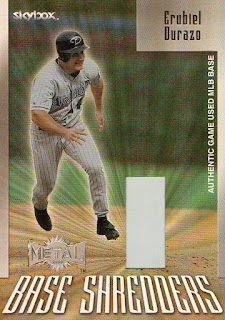 Erubiel Durazo, failed prospect. But we had found our Holy Grail. Cut deep into that thick holoboard insert, in someone's theoretical 288th pack, was a Base Shredder. At this point in the weekend, I was broke, but James wasn't. Forty American Dollars, less than the cost of a hobby box of Metal but a fraction of what it would take to find one, was dropped on the counter, and we were in awe.

-
Starting around 2010, I would guess, I started chasing the Base Shredders again. I was an adult with an eBay account, a vastly overpaid substitute science teacher job, and time. Their prices had dropped dramatically, with what is likely every pack of 2000 Metal being ripped, countless base cards curling in countless shoe boxes. Slowly I picked away at the 18 that constituted the set, knocking off the duds. 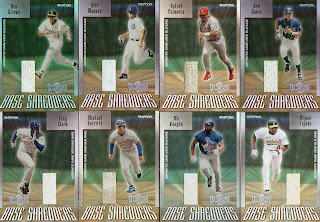 And then the middle range, or underappreciated players in the set. 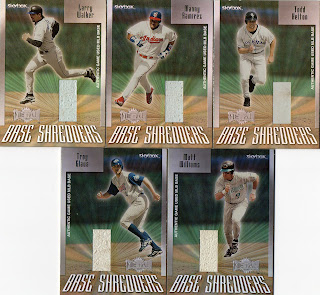 And eventually the Heavy Hitters, all Hall-of-Famers, or damn close to it:

Robby Alomar, Pudge and Vladdy Guerrero. All players I've chased at one point or another.

But there was always a whale, that one I could never obtain, until all came full circle in the summer of 2014. That summer, I made my return to Cooperstown's Hall of Fame Induction with a Braves faithful friend to watch the inductions of Greg Maddux, Frank Thomas, Craig Biggio, Tom Glavine and, Bobby Cox.

Just before leaving for the long weekend, the eBay alert came. A new posting.

Frustratingly dipping in and out of cell phone reception at Glimmerglass State Park and throughout the Village of Cooperstown and down the roads at Council Rock and Ommegang Breweries, I obsessively watch that auction, and probably foolishly considering the bid that I had in place. I forget to length of the posting or the cost of the final sale, but the final stone was laid on the path to a complete insert set of that holy grail we chased as mere teenagers in the summer of 2000. When on a hot, sunny July afternoon, returning to camp from the induction ceremony, I was finally the owner of this: 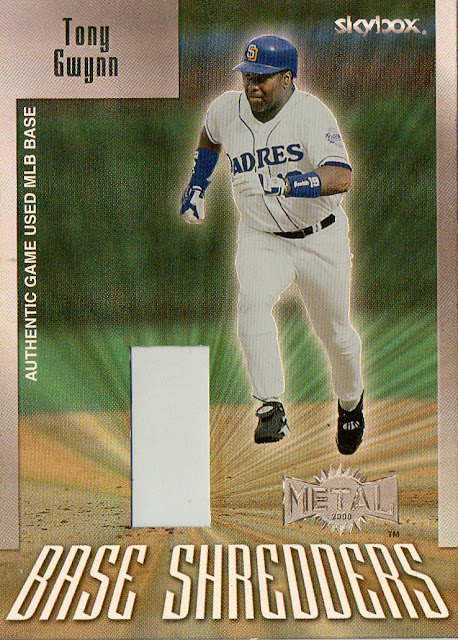 Tony had died just six weeks earlier. Baseball was still morning one of the greatest hitters of all time, but others of us were celebrating his life in whatever was we could. For me, it was this 1:288 pack gem, this little slice of meaningless rubber painted up in holoboard, thicker than any card I had ever seen.

Lately I've been extremely critical of the hobby. I assume that this cynicism will stay and I'll continue to bitch and moan about exclusivity, gimmicks, parallels, the amount of Yankees in a high-end set, and the general crummyness of the local card show. So for that, I apologize in advance.

But if just one kid and a group of friends like myself and those around me in the summer of 2000 feel the thrill of the chase like we did, I'll be more than happy to sit back with my cold beer, listen to Buck Martinez and Pat Tabler babble on about how great the other team is, and flip through thousands and thousands of baseball cards. Just because. And maybe even rip a few packs of Topps.


*I was lucky enough at the time to be trading in Yankee Country. Red Sox were treated like toilet paper - Yankees like ginseng in the arthritis apocalypse.

**Michael Barrett received plenty of criticism for his play, but mostly for being a hothead. This card always reminds me of one of my favorite baseball moments, which you can click to in that link.