Last weekend I had the urge to rip some hockey cards. I was hoping for some Upper Deck flagship, unaware that the release date isn't until November 9th. Not to worry, though, as MVP and O-Pee-Chee were already on the shelves, and I happily walked away with a fresh blaster of the latter. 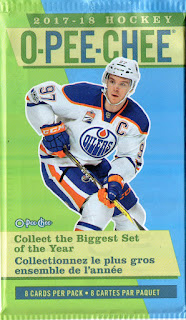 O-Pee-Chee is an important set in regards to the history of hockey, and it's recent resurrection has resulted in a very popular and fun set. I made a run at the complete set a few years back, but gave up rather quickly despite its availability. At the time, it just wasn't in the the cards. 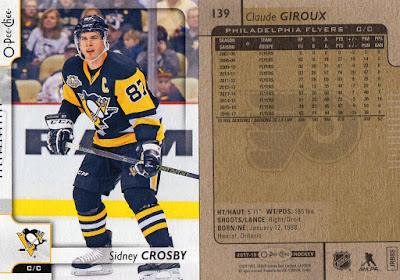 The main set is simple and reminds me of some Score designs in the mid-to-late 1990s. The cards are purely cardboard without much noticeable gloss on the front and zero gloss on the back. OPC remains one of the few sets that please the sense of touch for those who collected before the 1990s miss.

First, the Maple Leafs. Believe it or not, the Matthews above is my first of the NHL's version of Aaron Judge. He's featured on card No. 1 in this set, and is very much "The Guy" in NHL collecting right now. I'm not working hard at collecting Matthews, I'll center that attention on Nazem Kadri. 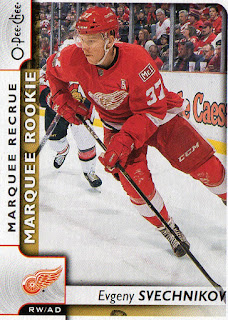 Marquee Rookies, Checklists, Season Highlights and League Leaders fall at 1:2, and somehow I only noticed this one aside from the checklists.

Falling 1:2 as well are the vintage parallels, which are really my favorite thing about this set. They can get frustrating if you're going for a complete set, but overall are fun and excellent-looking in 2017-2018. I managed one Maple Leaf, Connor Brown.

Rainbows come at a rate of 3:blaster or 1:8 packs. Managing three was huge, even if it involved two New York Rangers. As we'll see coming up, though, I broke the odds multiple times in this blaster. 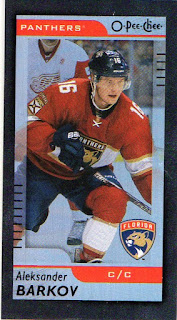 This Aleksander Barkov is a parallel-parallel, a Mini Black Foil insert coming at 1:41 packs. You'll generally see one of these per hobby box, and I was lucky enough to get one in a blaster. If there's any Panthers collectors out there, get at me. I'd love to share this with someone who might appreciate it more, and I have mini top loaders to protect it in.

As I mentioned above, I broke the odds multiple times in this little box. The Barkov would have made me happy enough, but the following was the true gem: 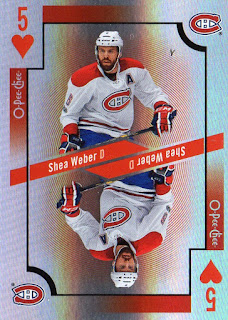 Despite the rounded corners being completely cut off, you can get an idea that the above Shea Weber Playing Card Foil Parallel is a real beauty. These come at a rate of 1:66, so this was a huge pull for a $20 USD blaster. Good stuff like this is why folks come back to OPC so strongly every year.

O-Pee-Chee continues to impress, and I implore any hockey collectors to go out there and grab some of this product.

fire emojis, or a lack thereof


I knew what I was getting into, I swear. I saw the pack and blaster box breaks elsewhere of the chaotic, completely nonsensical Topps Fire, but I jumped on it anyway. Splatters, holograms, flippability. All things aside, it came down to one thing: I hadn't purchased cards in a long time and this was something new.

I use the term "new" loosely, as Fire represents an unholy marriage between such classic sets as Circa Thunder and UD-x. Those were classics, right?

Right, of course they were. Let's jump into this blaster. My goals were simple: more Blue Jays than Yankees, some colorful stuff, and that's about it. Maybe this was a hate-rip. I don't even know anymore. 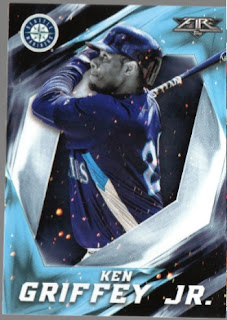 So...that's a pretty good start. This pack was purchased before Houston's unforgivable ALCS collapse, though...so I'm still kind of mad. Also, if you're going to highlight some of the game's greatest players of all time...maybe avoid their overweight DH phase. 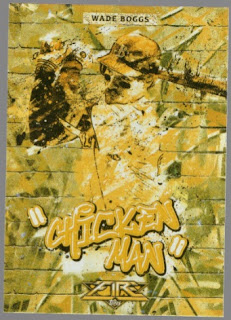 The monikers seem hit-or-miss. Chicken Man is one I've definitely heard, but as we'll see later, they get more obscure. If you squint hard enough, you can almost see Boggsy behind the FIRE logo, "Chicken Man" written in stereotype-style graffiti, and for some reason - bricks.

There's...nothing worth mentioning here, other than a big shift in Jays: Yankees to 2:1. Yaz represent the FOURTH retired Red Sox within the first three packs, as well. Fun. 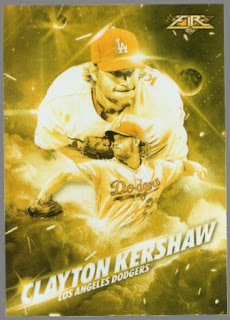 I have no problem with this pack. Three rookies right off the bat, even if only one of them is likely to be in the league five years from now. Another Sox to end the pack isn't terribly inspiring, but the Kershaw is a beaut. 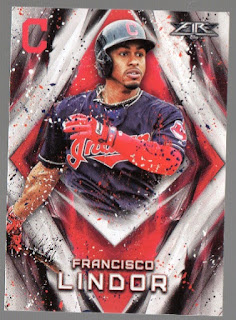 
Despite the green Hamilton, this was a garbage fire. Two Yankees and a Canseco. You can't get much worse than that. Ratio update: 4:1 in favor of the Evil Empire. 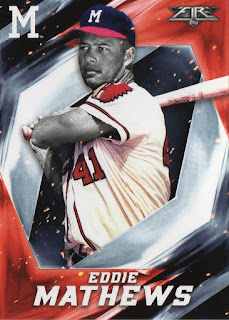 We've reached so deep into the garbage that that super gross water that forms at the bottom is leaving a stink on my fingers that will last for weeks. AARON BOONE?! Come on.

The Moniker insert here is Rickey Henderson, listed a the "Man of Steal" which I do not remember ever hearing. There must have been a better option than this.

I picked Eddie Matthews for the lone scan from this pack to illustrate how ridiculous the retired players look on a design like this. An absolute atrocity. 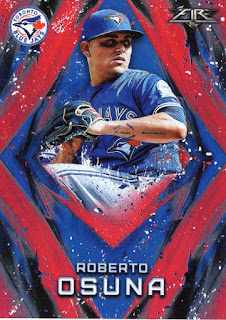 Didi is currently my least-despised Yankee, but he brings the ratio up to 5:2, which is horrifying, but expected. Osuna saves the pack, even if it's the second iteration of Osuna in the box, with no other Ajulejos represented. It was a fair ending.

But overall, yes...this was a hate-rip. What a monstrosity of a product. Legends on glorified holoboard emoji cards? Aaron Boone? Come on. This is the kind of garbage that Topps can keep throwing out there, and the lack of competition on the market means we'll buy it right up.

There's another pack. Four exclusive gold minted super ultra mojo boner base cards inside! This is a threat, not a promise. 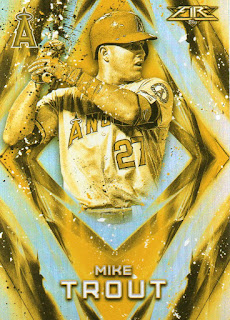 So, there's that. There's very few positives in this product, one of which is the very excellent "Joey Bats" Monikers available and also some Marcus Stromans. Other than that, it's just plain awful.

Email ThisBlogThis!Share to TwitterShare to FacebookShare to Pinterest
Labels: 2017 Topps Fire, Clayton Kershaw, roberto osuna, why is Aaron Boone in a 2017 product

The Future of Baseball in Syracuse 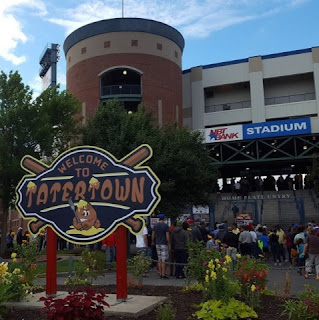 On Monday, news leaked that my "hometown" team, the Triple-A Syracuse Chiefs, had been purchased by the New York Mets. Take a look around this blog and you'll see some throwbacks to the franchise and its significance to me, especially regarding the logo.

I use the term hometown loosely, as I grew up more than an hour away from Syracuse and identify completely with Western New York and the City of Buffalo. However, its where I live and the Chiefs are the team I have been watching since the early 1990s, so anything similar to what happened earlier this week gets me a little edgy.

Syracuse is not a baseball town, and it never will be. That's fine. Neither is Buffalo. But people here are fickle and miserable and find every reason to hate going to games, sometimes myself included. Attendance is poor, but it's getting better due to GM Jason Smoral's relentless spirit and unending promotions. Can the Mets affiliation save baseball in Syracuse? I'm not sure. But we can explore this a bit. In order to at worst - maintain - baseball in this city, here are some suggestions.

Seems simple enough, right? Probably not. We still have the whole Mets affiliation...thing.

In yesterday's interviews, Jeff Wilpon said something in regards to committing to the city and keeping baseball in CNY. Forgive me for not taking a Wilpon quote as gospel.

There's plenty of variables that might move the team out of the area, and none seem too far-fetched. The first is that CNY is NOT Mets territory. Aside from Queens, though, what is? The city and surrounding areas probably profile as such, in regards to fandom:

This will never, ever be a Mets town. They're front-runners. Just look at SU Football attendance. The Mets aren't winners. When their teams aren't competitive, the fans disappear and cry into their shitty Syracuse Pale Ale*. The Mets affiliation itself will not affect much, aside from subjecting this eyesore of a city to even more orange.

Will attendance drop? Probably not. But there's no way they're filling the stadium up on weeknights, regardless of any of my suggestions or the Mets' efforts to do so. The best we can hope for is sustain, be a short taxi service from AAA-MLB, and give the city something to do on summer nights.

Will sustenance be enough for the Wilpons? Since they've already paid out millions in fines for their PONZI schemes, probably not. There aren't many other markets worth pursuing in New York State, though, especially upstate.

The city's main competition will be Long Island. Currently Long Island features the Ducks, but would those stadium owners outbid our locals after the stadium lease ends in 2025? Absolutely. Why have unaffiliated ball when you can have Triple-A? It makes too much sense, even if it would still be a 45 minute drive rather than a 45 minute plane ride between both options.

I do believe baseball can succeed in Syracuse, but it will take something we just don't have here: community effort. In a city without an identity, its extremely difficult to support a Triple-A team playing in between a swamp and a swarm of overpasses located away from the populated area. The next eight years will be do-or-die for this franchise as a Triple-A affiliate. Baseball isn't getting any more popular here, and a best-case scenario might actually be Double-A in the somewhat distant future.

Oh, and this is acard blog or something, so here's a Chiefs card: 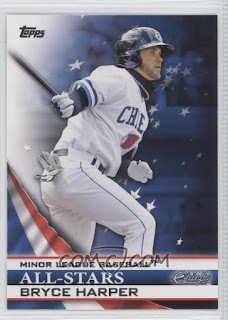