If you love Carlos Delgado, as I do, you'll love this post. These are my recent killings from COMC and ebay (only one of them), but these were some serious personal collection additions for someone on a lowest rung of government (county) budget.

I actually grabbed about 5 more Delgados than I'll be posting here, which I hope I've added to the World Series Jays checklist (Delgado played one game with the bluebirds in 1993, thus, he was rewarded a ring).  That's all that matters.

But what matters now, are the cards. And here they are: 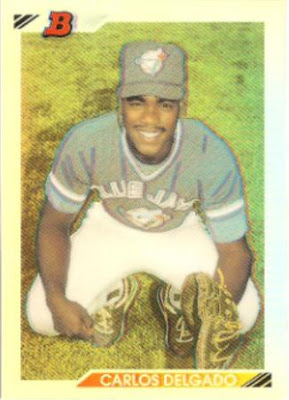 The reprint refractors were a great idea, especially since the original (which, embarrassingly,  I do not have) was about a year before refractors were born, and many years before Bowman Chrome. Plus, it features Delgado in catcher regalia, which I am all about. $.39 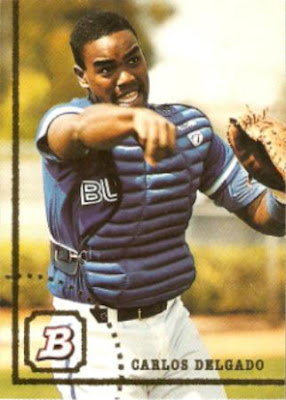 Classic. Very little comments needed here. Delgado as a catcher. Playing in what literally looks like the Sandlot. $.25 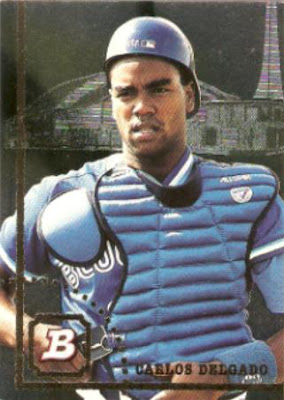 Does anyone know if the foil cards were a subset in '94? I was eight at the time, so I wasn't paying an extraordinary amount of attention. Anyways, here we have Delgado in catcher's equipment again, looking super awkward. Delgado wasn't a great catcher, and was in left field by the time he was getting regular playing time and murdering baseballs. $.25! 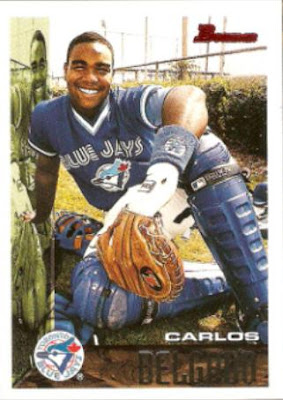 I love me some 1995 Bowman. A really classy set. And here you get that Delgado charm, the catcher's equipment, old school Jays logo (my favorite version WITH v-neck) and the inclusion of minimal foil. Man I miss baseball cards like this. $.99 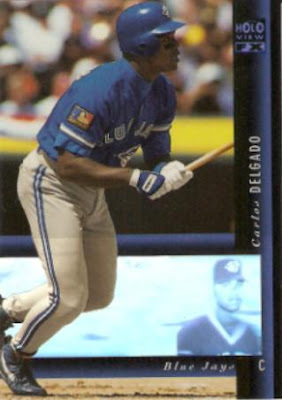 Ahh, the handsome brother of Robbie Alomar...IN 3-D! These are one of those cards you need to see in person, as the scanner just cannot do them justice. $.74 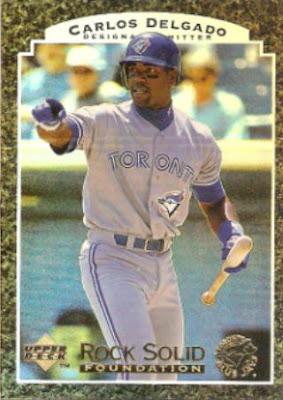 I pulled a Johnny Damon version of this back in 1997. I love these. Some inserts just pop, and UD was awesome and making that happen in the mid-to-late 90's. This is entirely holofoil (imagine a diet refractor) with gold foil, and the border has a granite-marble pattern. Just awesome. I think I'll have to complete this whole set, so if you have some, I'll make it worth your parting. $.24 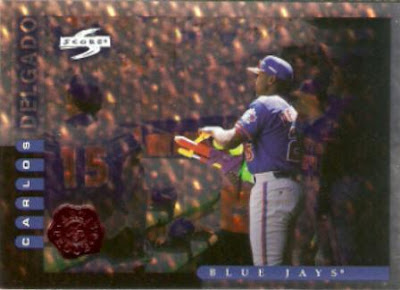 I had no idea what this card looked like when I bought it, aside from some holosparkles and an awesome image of Delgado being himself x1000. It's really and excellent pattern and makes me miss the score brand (just a little.) I just wish the rest of the Jays in the dugout- Shawn Green (#15) and others, were not relegated to the background. $.74 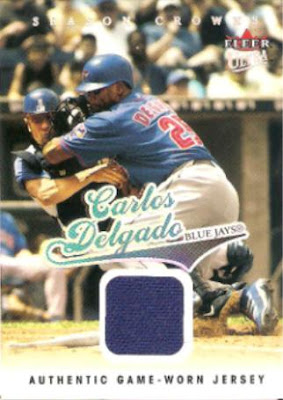 Umm. Holy butt. Amazing card. I'm a total homer for Fleer Ultra, Carlos Delgado, coloured jersey swatches and home-plate collisions. This card is an early favourite for my PC power rankings #1 slot (coming soon).  I was thrilled to get this for a poverty-line $2.95 offer. Wow I love this card. To Jays fans out there - go get this card. It's phenomenal, and I think there's another 150 or so out there.

Okay - one more installment from my COMC order. Also, I forgot the ebay Carlos Delgado steal from earlier this week. It's worthy of its own post, even if I don't care for it so much.