i checked out my cards 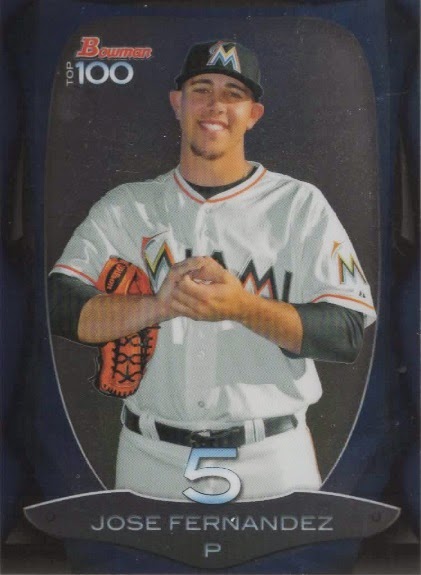 Every black friday (I refuse to capitalize it and acknowledge this day as an American holiday) I take advantage of the sales and free shipping over at Check Out My Cards. This year I had been building since early summer or possibly late spring, and only managed to walk away with about 40-50 new cards. Nothing spectacular, but hopefully you'll find some nice commentary on this page today.

First off, as you can see, was Jose Fernandez. He's kind of a dreamboat. Here's some more of him: 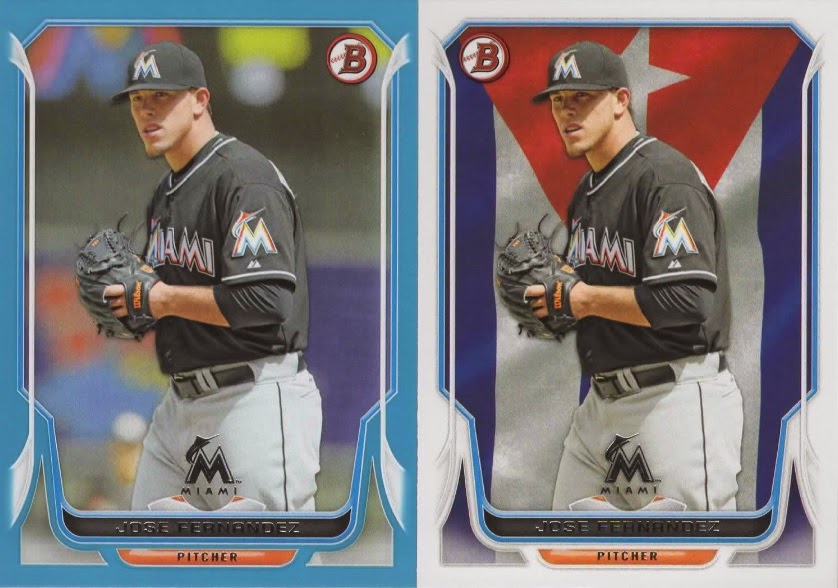 This year's Bowman was a little cluttered, but the International parallels came out nice. The blue? Well, it came cheap. 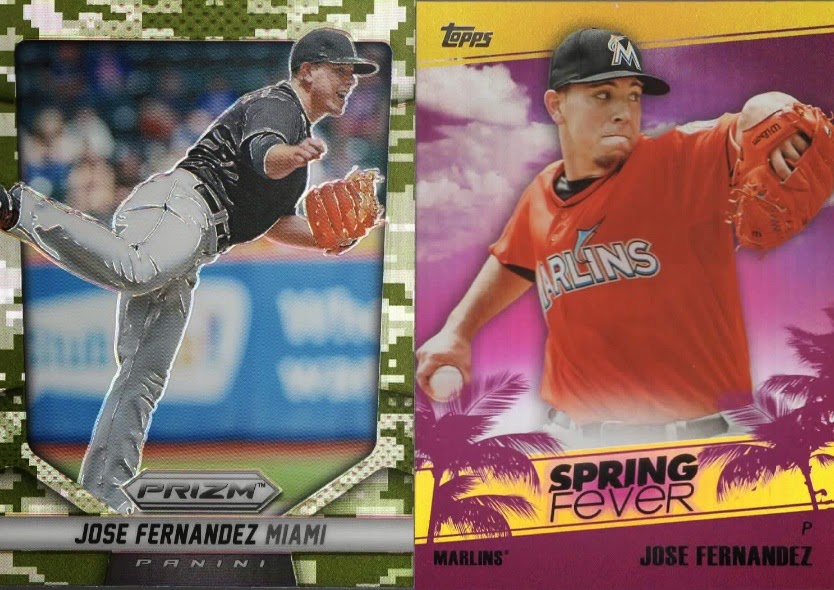 This year's Prizm was just fine, once you get past the ghastly mirror base cards. Here's a camouflage parallel...which was kind of disappointing in-hand. It is paired with the 2014 effort of Topps' Spring Fever...redemption set? Which is exactly the same as 2013.

On November 17th I went on a COMC spree for Russell Martin cards, becuase of course I did. He's been a long-time favourite of mine except for two years he spent with The Evil. These cards were had for surprisingly cheap. I've been collecting the Bowman Sterling WBC for a while, now, and this is my favourite so far. Also, DIRT.

He'll be catching baseballs from this guy a lot in 2015: 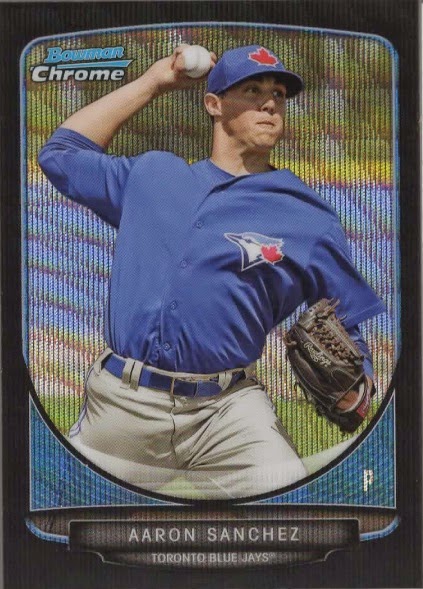 He's good. But on to some past Blue Jays for a while. He was really good. Aside from Ken Griffey Jr., he's the only other favorite of mine who I've seen hit a home run in person. And it was a doozy. But here he is, fielding for some reason: 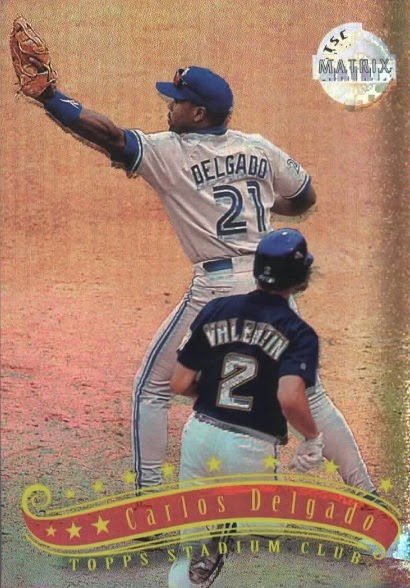 I had never seen a TSC Matrix card before, and in hand it's a strangely mis-struck, digital holofoil that scanned poorly. Of course I love it. DIRT.

Not enough dirt here to acknowledge, but a player who's uniform always seems dirty from great defense - whether or not your defensive statistics say so or not. I was aiming to pick up some Alomar Padres cards - and managed just this one. I collect Robby in all uniforms, though the orange ones from the Mid-Atlantic bother me deeply. Also, 1993 Leaf might be the best set ever. 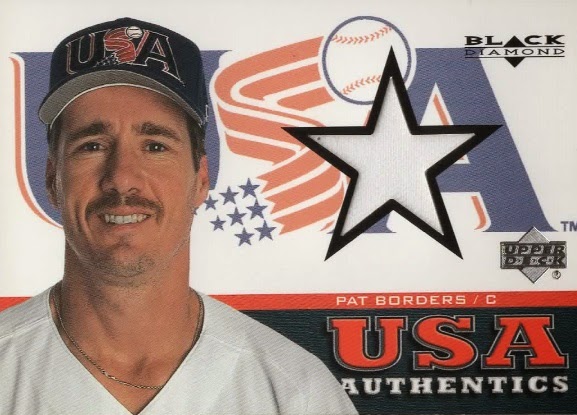 Pt Borders was only a starting catcher for about four years of his 17-year careers, but two of those are 1992 and 1993. Those were very good years if you'll recall, and it's hard to ignore Pat's impact on those Blue Jays teams.

He's also a TEAM USA guy, from before they were awful. 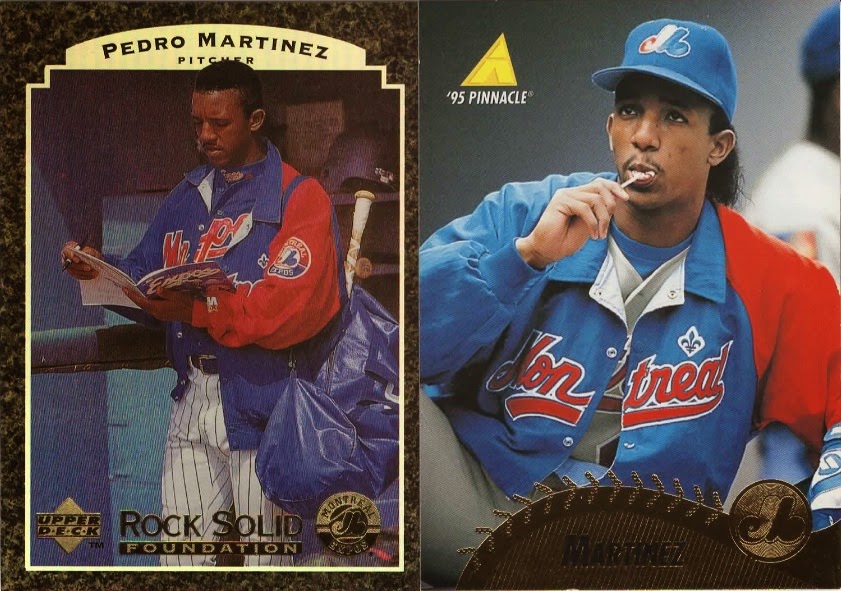 Oh, Pedro. Being awesome signing a 1996 Expos programme and being awesome...for the ladies. 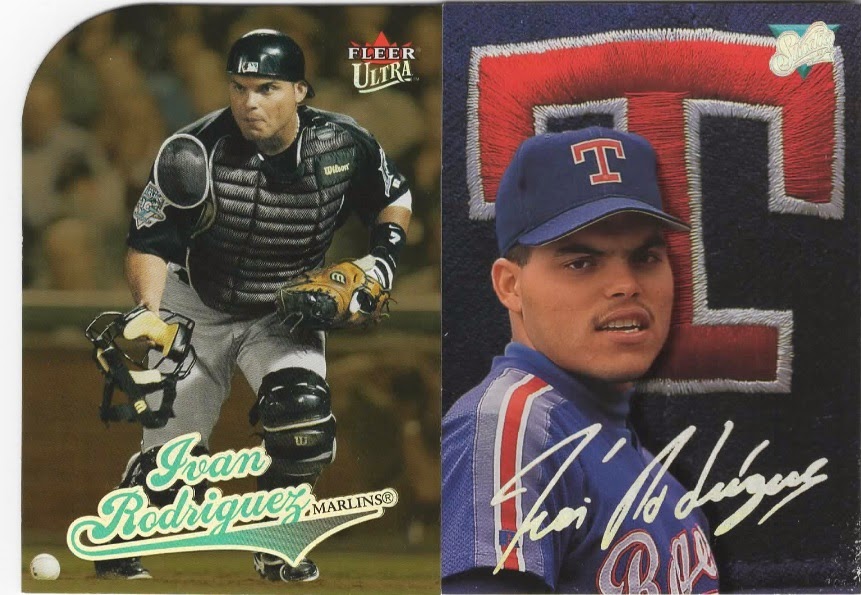 And Pudge. Being a huge badass in the Gold Medallion on the left, and a huge creep in the Rangers Studio on the right. My lawwwd, that mustache. It's even worse on the back. 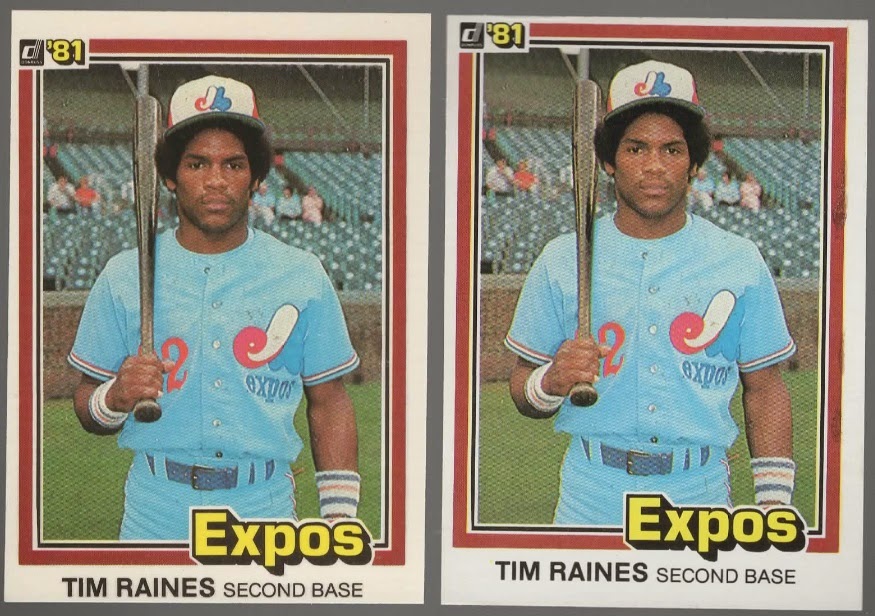 We'll end with some Rock Raines, terrible mis-cut in his 1981 Donruss GEM. I didn't realize how poorly both were cut until I had them side-by-side. In real life, Rock is a 100% Hall-of-Famer and not in any way mis-cut. 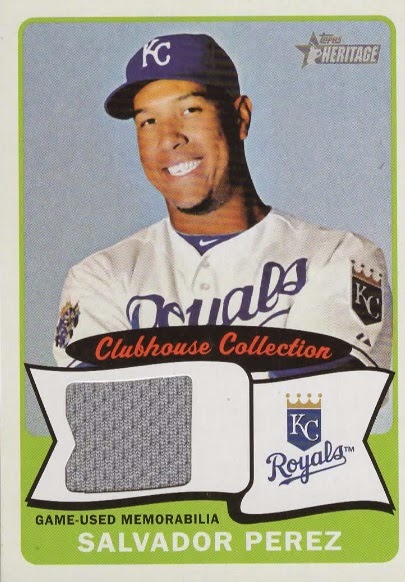 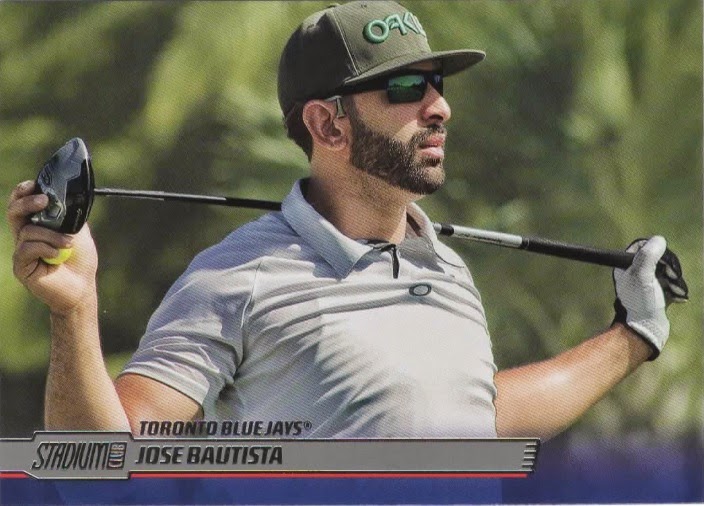 There. I got that out of the way.

Yet when it comes to base cards, we can always wait a few months and take advantage of disappointed case breakers and prey upon junk, worthless, common cards. The nerve Topps has putting base cards to fill up these packs and waste time getting to these ultra mojo hits. The nerve, indeed.

You see, the cards look great. Every thing that made Stadium Club great: great photos, nice color, a good sheen and no borders.

Except Topps decided to put all their energy into the mojo, and in turn printed these cards on fortune cookie paper.

I'll start with Robert Allen Dickey, the knuckleballer. Dickey is a cool dude, but I'll be supremely disappointed if he starts Opening Day again in 2015. He's league average now. But well above replacement in terms of style with that baller Canada Day jersey and high socks. I'm pretty sure he got smoked that day, too. 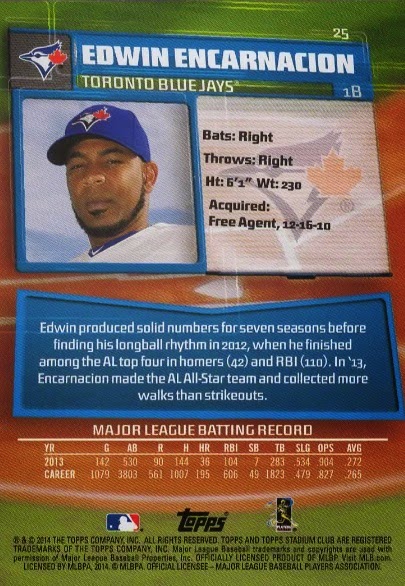 Rule #45 of card blogging" always show the backs. Someone out there cares. Edwin is a good player for this chore - if nothing else you can appreciate those numbers that so few non-Blue Jays folks see day in day out. The backs look good, too, but you'd better be careful you don't stick your finger tips through the cheap card stock. 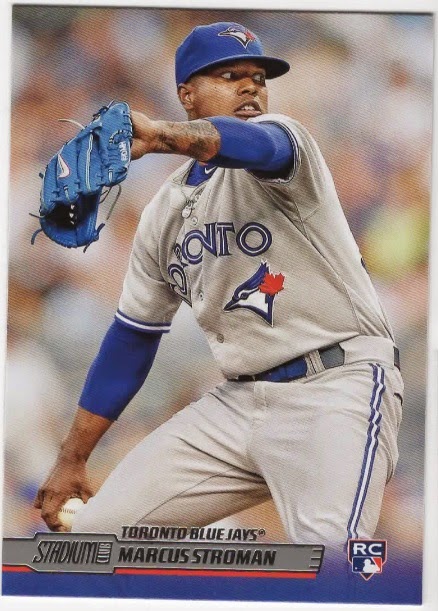 Any post on this page is incomplete without my boy Marcus Stroman, who should be the Blue Jays ace. In a way he already is, but we don't need to place that label on him already. This is a pretty generic pose, though, and a weak effort from Topps. That said, I'll still be chasing his autograph in this set - pretty much the only Blue Jays insert to be found. 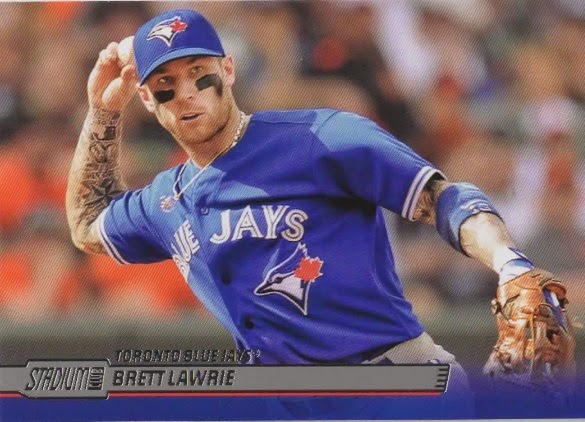 Gone, but never forgotten. I'll miss Brett, but Josh D. is an overwhelmingly better baseball player. This is a great shot - one I'd like to cal a pitcher shot - as its zoomed in close enough to give you the feeling of being on the mound while Brett makes a routine throw across the diamond which inevitably sails into the sets behind first base. 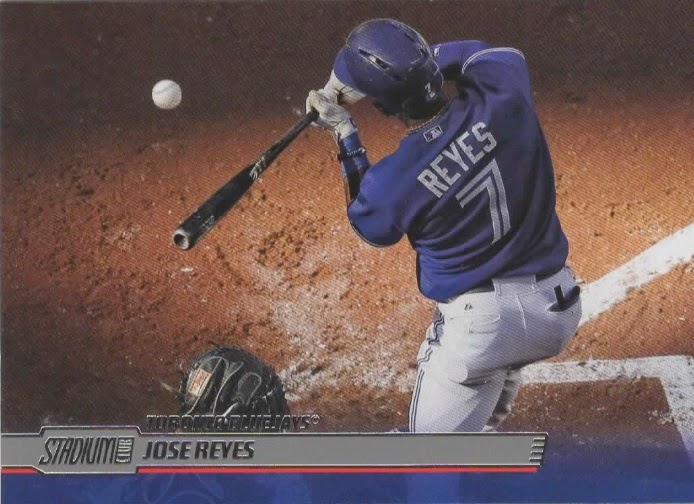 Quite possibly the greatest Blue Jays card of all time. At least 2014. Jose Reyes. DIRT. I love dirt. I miss dirt. I miss Jose. I miss baseball.

But it's just...it's not the best baseball card of 2014. It may be number two, but number one is so far ahead.

So far ahead, so far away. There was never a competition. 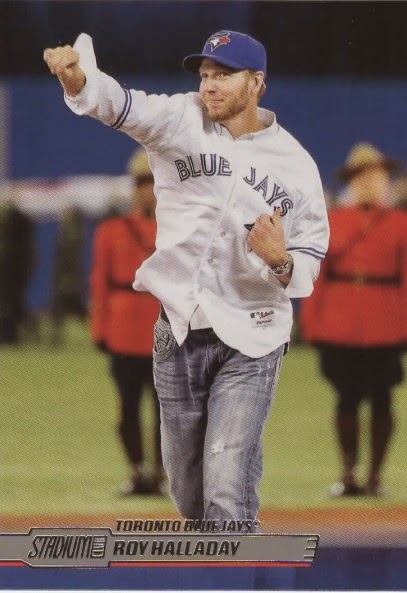 Dad jeans and all.

The faintest glimpse of a smile.

The very heart and soul of every one of the Blue Jays faithful. In one baseball card.

A Blue Jay for one last day. One last pitch.

Thank you for everything, Roy.