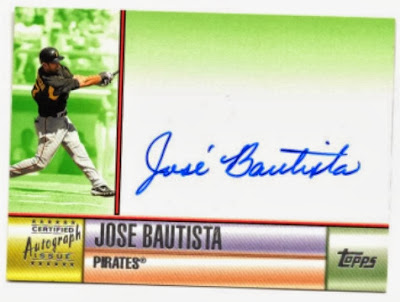 I've always wanted a Jose Bautista autograph, especially an early one. And while I have a disposition against empty space on a baseball card - especially about 1/3 of the total surface - this is a good one. It also came quite cheaply. I don't remember the exact cost, but if was something like $4 - likely attributed to the seller having zero feedback.

I didn't give the seller that +1. It took them a while to ship. Cards from North Dakota rarely take over a week from trader Matt P., and this took nearly two weeks. Laziness was striek one. Strike two? The top loader was an antique. Yellowed. Scratched. Joey Bats was being disrespected. Even worse, he has to touch that nasty top loader in the nude - no penny sleeve. I just couldn't give the seller a positive, and once I liberated the card from its refrigerator box, I noticed the corner was dinged, too. 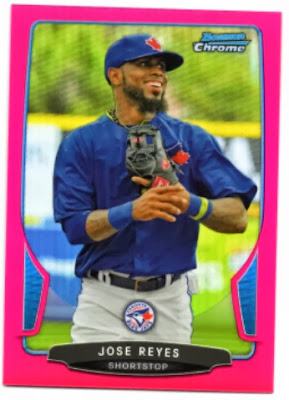 A pink 2013 Bowman Chrome Refractor out of /35. Looks more red in person, but isn't pink just perfect for smilin' Jose Reyes? This card is just so...happy. 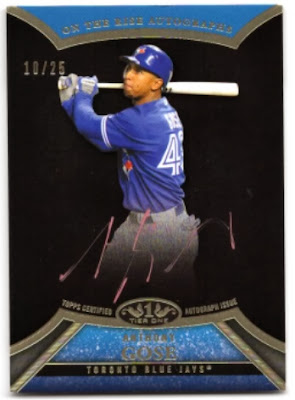 This one not so much. The red (pink?) ink seems to be from the end of a store-brand Sharpie. And the background is dark an mysterious. Also: blurry as hell for some reason. 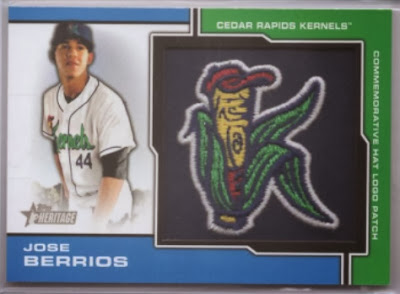 ...now. While 2013 Pro Debut totally mailed in the manupatches in 2013, Heritage crushed them. The checklist is deep, the patches are new and awesome. The Joe Berry you see above is from the Cedar Rapids Kernals, because who doesn't love a corn husk growing a baseball bat with a cap on it? 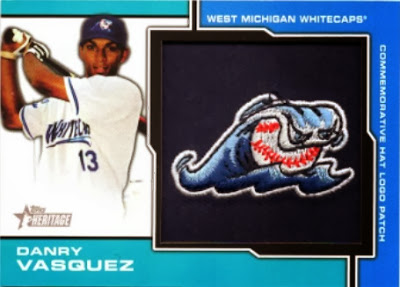 Or a wave overtaking a baseball? MiLB logos are something I love. Maybe it was the mystery of all the small city teams rolling through Syracuse in my childhood.

For that matter, where are the West Michigan WhiteCaps based? Answer: Comstock Park! Which is north of Grand Rapids, Michigan. And their mascot is what looks like...a badger? Now you know. 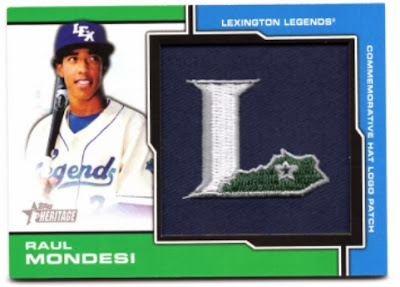 From badgers to...Legends. I guess. Or a green Kentucky completing an "L" for Lexington. Adalberto, err, Raul Mondesi, Jr. is an extremely fast-rising prospect in the Royals org. Son of Raul "obnoxious bat speed" Mondesi, Adalberto was signed out of a Dominican camp, although he was born in America (MLB fast track!). He's only 17 years odl now, and he's already made it through a complete season of A Ball with Lexington. I've heard his glove could play in The Bigs right now. 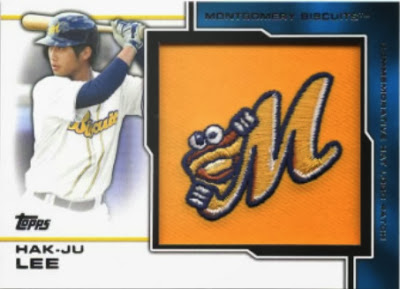 Hak-Ju Lee still needs some marinating, though, as the Rays SS/2B prospect can't seem to play a full season without breaking or tearing something. Hopefully the return in the Matt Garza trade will finally work out in 2014.

But seriously, IT'S A BISCIOUT SNEAKING AROUND AN 'M."

I've tried writing this introduction three times so far. That seems to be the way things are going with writing lately. Do it once. Try it again. Submit it. Get rejected. Something unrecognizable from the origin as the final product.

But that's work, and this is not. SO if the introduction doesn't work, so be it. This blog is unfunded, so I don't have to impress anyone.

If you're like me, you're likely perusing blogs and watching the greatest thing in the World, October Baseball tonight.  In honor of the Pittsburgh Pirates Renaissance and the revival of fall baseball in Cleveland, please enjoy my nine favourite (current) Cleveland Indians cards.

This was an easy post to dream up. Somewhat unconsciously, I've been adding Tribe cards to my collection more and more through the years.

This one, however, was way before my years: 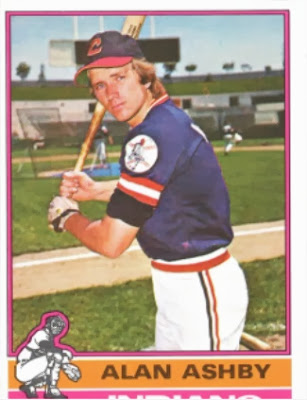 I long for the days of Alan Ashby commentating Blue Jays games. In fact, in the three games in Houston this season, I would tune in to their telecast, the new home of the proper baseball analyst. 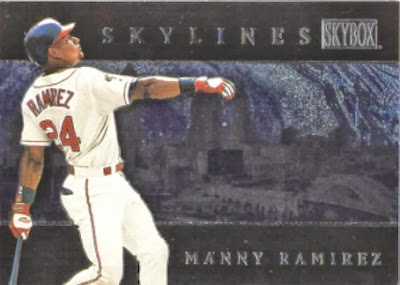 Twenty-four years later I was well into collecting cards - and Skybox was totally my bag at the time (remember going into the shops and having OPTIONS?!). By 2000, Manny wasn't quite "Manny" yet, but he was surely a star, the Indians were a good team for the first time in my lifetime, and 2000 Skybox created my favourite insert set of all time: Skylines. These are majestic in-hand. Go  grab some off of COMC. They're cheap now. 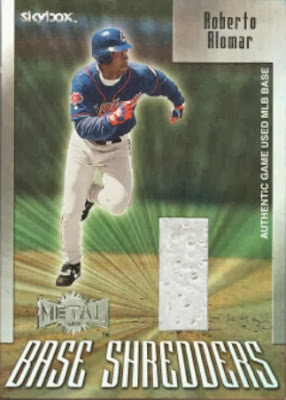 Also in 2000, Skybox came out with Metal. It was like a diet Metal Universe from 1997, but still extremely gaudy. Within those extravagant foil packs, well, every 288th foil pack, was a Base Shredder. As was the style at the time, the cards do not scan well but have an extraordinary in-hand feel. I love them, and will defend them and my favorite player all-time not named Carlos Delgado to the death. This one took me 12 years to track down. I finally came up with it this summer. 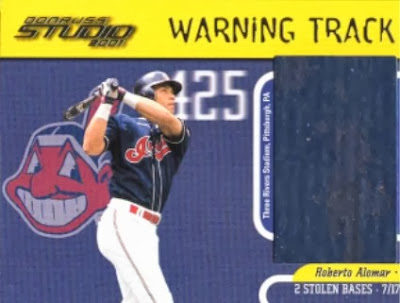 Well this post is already making me nostalgic for the old brands. The insert was "Warnign Track" but the swatch is from the wall - and unlike cards nowadays guaranteeing that the swatch comes from a "relic located within the same state as player pictured during said player's lifetime", the back of this one reads: The enclosed piece of outfield wall was cut from Authentic Outfield Wall from Three Rivers Stadium used in an official Major League Baseball Game...This is a photo of the actual wall from which the swatch was taken." And of course, there is a photo. Oh, and: "2 stolen bases - 7/17/99." Thanks, Donruss. 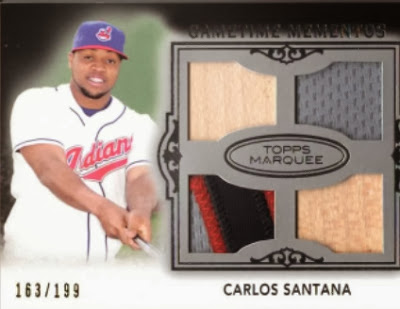 This might not be my favorite Tribe cards, but as the old adage goes: "when you've got a sick patch, show it off." Hey, look who's batting right now! 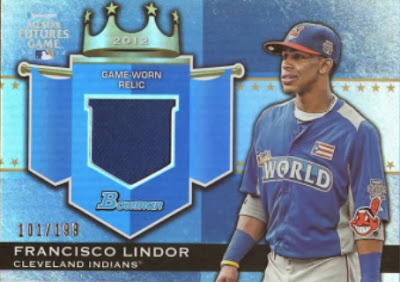 ...not this guy. In fact, I probably doubt we'll see young Francisco Lindor until about 2015. The mostly-glove shortstop was last seen with AA Akron Aeros. It's been said that the A > AA transition is the toughest. Hopefully Lindor, who's 2013 was acceptable for a defense first shortstop, will improve in 2014. 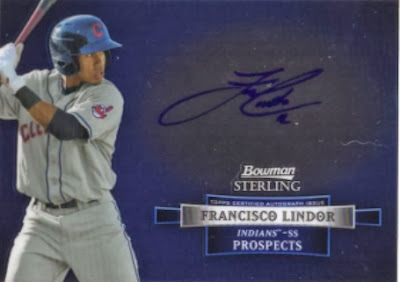 So while he's hanging out in the miserableness of Akron, Ohio (I assume) and eventually Columbus, I'll keep chipping away at his checklist. I have on last count, seven of these. It's cool to see the variations in the autograph over thousands of inkings. But man, 2012 Bowman Sterling was a miserable set to scan - these are beautiful in person. 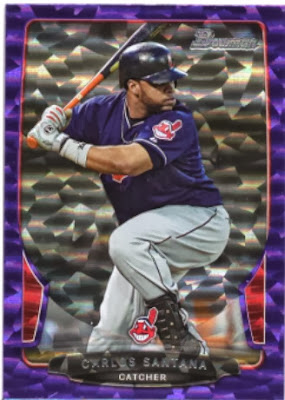 Purrrple! Santana! Token leg kick! This is the second of these purple ice refractors I've acquired from 2013 Bowman. This one is 10/10 and was had for only about $10 if I recall correctly. While the scan shows a dark purple, these generally tend to give more of a Triaminic cough-syrup hue. 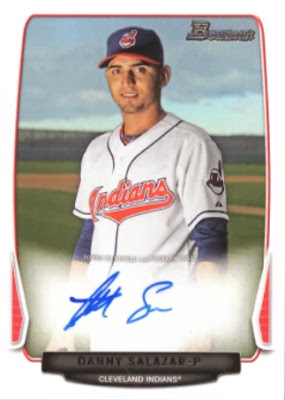 And last but certainly not least, our fearless home starter for tonight's play-in game. It's a beaut. I'll be honest, when this came out of a pack a few months back, I wasn't incredibly familiar with Danny Salazar. A month later, he was leading me to plentiful strikeouts and a beautiful ERA going down the streatch. A month later, and the 22-year old is starting in this game.

And he looks damn good.

Enjoy the game, folks. Hell, enjoy all the playoffs!!!11