...and now for Part B: The hockey cards.

I'm struggling to build up my hockey collection, and with a recent change of allegience from the impossible-to-collect Toronto Maple Leafs to the ideal-to-collect Minnesota Wild, I'm doing  a bit better.

Also, before you crucify me for my allegience change, mind you:

1. I was originally a Minnesota Northstars fan.
2. My favourite Maple Leafs were Mats Sundin, Matt Stajan, Alexander Steen and Carlo Colaiacovo. They were all casauaties of the Maple Leafs regulars exodus over the past few years.
3. They're like collecting the Yankees. Everyone wants Maple Leaf relics, autos, etc. Except they're f#ing terrible.

So, on to the cards, starting with ex-Maple Leafs and present who-the-hell-knows-what, probably Flame: Matt Stajan! 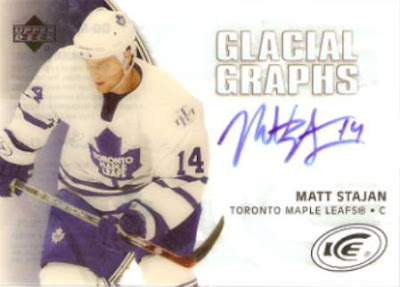 Greg was right. These cards are phenomenal. This guy went for a cool $3.33 offer on COMC. Matty's signature is remarkably consistent, as if he's been practicing it since that magical moment where a coach may have said "you've got  a chance to be a pro, kid." No one ever said that to me, but I practiced my signature anyways. 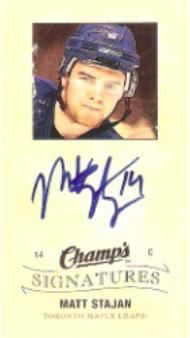 I love, love, loved 09-10 UD Champs. It was just awesome. Where else can you grab a Martin Havlat with impalas parallel, a stegosaurus and a mini jersey or autograph in one pack? Man, I am starting to miss UD's presence in baseball. Goodwin doesn't count. Nothing with Lebron should count. $3. 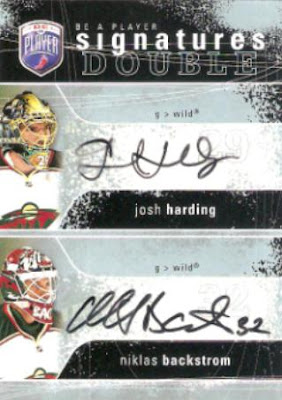 I wanted this one as soon as I saw it on ebay. For $25. No way, tough guy. So I tossed a lowball offer on COMC for $3.75. Winner. The Harding ink is slightly smudged. Not sure if it was myself, the guy who pulled it, or COMC. I don't really care.