I don't expect too many pageviews today. It's one of those family holidays, you know.

You should all go outside and enjoy the what-seems-like-Spring weather out there. I mean it. I won't be offended.

A couple years ago I started a fantasy baseball league at the University at Buffalo, where I completed my master's in - can you guess what? in May of last year. We were always away from our families, mine being across New York, two from New Hampshire, one not close with his family, Maine by way of Orono, and I added some high school and undergrad friends - one with the NAVY in Mississippi displaced from his family in Connecticut, and others from my hometown uprooted in Pennsylvania, Texas, New York City and other far away dreamlands. Last season, one of our league strongmen moved all the way to Singapore for a post-doc at a Volcano Observatory. Sweet gig, amiright?

We always drafted the evening before the season started, watching the Opening Night game projected in the Climatology office/grade student office, grilling hot dogs on a George Foreman-esque grill and drinking Budweiser out of flag cans. To me, the Easter season became less about hiding eggs and eating ham (which I eat almost every week anyways) and a lot about missing my buddies from the past decade-and-a-half.

Needless to say, I scheduled our draft during all three of my localish families festivities for today. I felt like I owed it to my old friends to be present. My Easter family, if you will.

Sorry about that. I had been guilt tripped a bit by some extended family, and I wanted to get that off my chest a little.

Now, on to some cardboard. 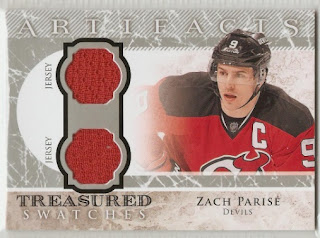 I've wanted to add something different to this blog, and aside from my other less-conventional antics, one of those things was adding a bit more of a hockey presence to the local community.

Hopefully, 85% of you haven't tuned out at this point.

This is a Zach Parise dual relic, in wonderful Devil's red, supplied to me by mostly Hockey-oriented blog Cardboard Conundrum. If you like hockey or have Cubs or Texans cards to unload, He can take them. He also rips a ton of product that I couldnt afford with my old budget allocations, so maybe we can spark up another trade, soon.

I am a sucker for anything Parise after I drafted him LAST overall as a sophomore in college in one of my first hockey leagues, and he and Evgeni Malkin carried me to a Championship over my die-hard Sabres fan roommate. 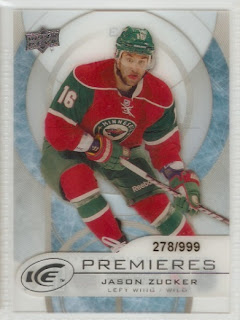 Also included was this premium UD Ice - probably one of the best-looking sets ever - Rookie /999 of Jason Zucker. I mean that thing is sexy.

Always a Maple Leafs fan, I have taken a liking to the Minnesota Wild with their signing of Zach Parise last summer. It took a long time to click, but they're been on a hot streak of late - until the last couple of awful games.

If the name Jason Zucker sounds familiar, this is probably why: Not cool, Corey Perry.

Zucks has since been sent to AHL Houston (kind of like the Blue Jays getting sent to Las Vegas) to get more ice team. It worked with Nazem Kadri. 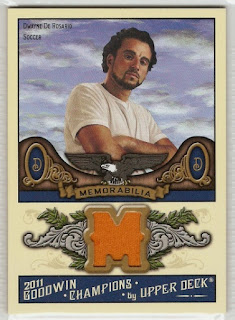 I mentioned this one briefly in trade talks before, and said it was optional to throw it in.

He threw it in anyways, and I am glad to see it. This is my only soccer relic after selling off a Landon Donovan jersey ($!) a few years back, and it's a good one.

Might also be one of my first ever orange jersey swatches. 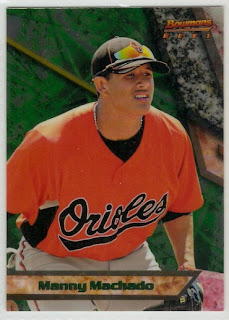 But of course, there was baseball. First, some more orange:

I've decided that I must have all of these Bowman's Best cards, prospects and pros. The 2011 effort was much, much better than the 2012.

We finished my adding one more rookie, but this one much more significant to me, but also a third baseman with an elite ceiling, defensive flair, and a solid line-drive bat. I am babbling at this point to maintain the integrity of the formatting of this post. It's getting kind of difficult. Oh well, another bite of my coconut cake donut and a sip of my Caribou Blend coffee.

That's a damn fine cup of coffee you have here made of Caribou. And damn fine cherry pie. 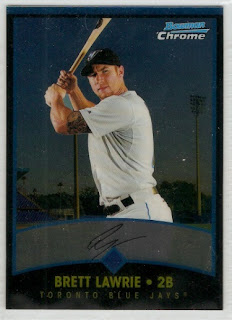 Has anyone else notcied that pretty much every serviceable third baseman is injured right now? I have. In my drafts I've been grabbing Freese, Headley and Lawrie on the cheap because people are passing them up.

The season is won at the end of the year, dingus, not April.

I say unique because Justin is currently undertaking the Sergio Santos experiment. Sergio struggled in the minors as a hitter, but his arm was always an impressive tool. Seeing what they possibly had in him, the White Sox sent him to A-ball in hopes of converting him to a pitcher. The Blue Jays waited for the White Sox to sign him to a team-friendly deal, and made a trade of mega-bust Zach Stewart for him. 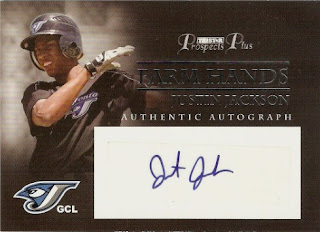 Jackson seems to like his conversion to the mound so far. I wish him the best, both from a Blue Jays fan's sake and buying up a bunch of his cards for cheap as he toils in the very low minors.

I've grown quite a liking to the TriStar ProspectsPlus autographs from whatever season this is. I currently have Justin Jackson, Brett Cecil and JP Arencibia. I just love black cards with autographs.

Anyways - Matt, thanks for the huge trade. I think more jersey material moved from here to North Dakota than cardboard.

Cannot wait for the next one.