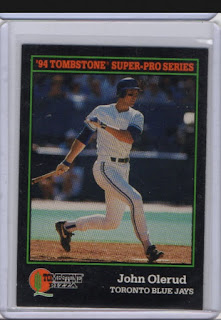 I started kicking around here a few months back, and after my previous tenured with plentiful trades, I wasn't exchanging any cardboard with y'all. That was until I opened up some 2017 Topps Fire, which I found was difficult to get rid of through ebay and my dire attempts to fire it into the sun where it belongs.

Luckily I came across a post at Waiting 'til Next Year (side note, still waiting?) where he was doing the charitable work of extracting this evil from other collectors in attempting to complete the set.
After I threatened Tom night and day with haunting visages of bent corners and miscuts, he finally agreed to take some Yankee-branded Topps Fire off my hands, and I managed to throw in an Edwin Encarnacion to top him off.

I would have been happy with one less Yankee and two less Topps Fire base cards in my house, but Tom submitted a care package anyway, full of Blue Jays from late 80's and early 90's. 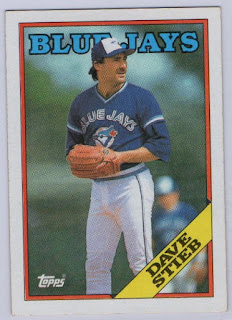 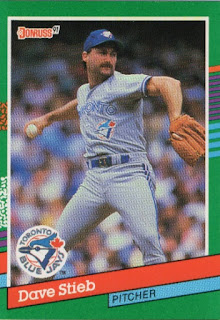 More Stieb, this time in green, pitching to a packed house. Magnificent. 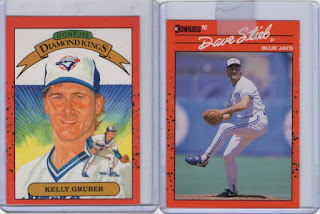 Stieb again, this time with the accompaniment of the legendary Kelly Gruber. You might notice the Scotch tape on the Stieb, but do not worry - Tom isn't one of those domestic terrorists who use Scotch tape on top loaders, this was left over from an eBay transaction. 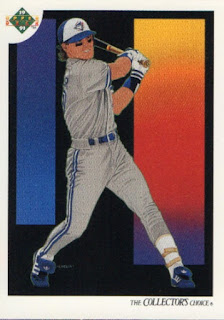 More Gruber Art, this time from 1991 Upper Deck. US chose Gruber for this checklist despite such powerhouse players on that Jays roster such as Kenny Williams, Greg Myers and Junior Felix. I kid. The core for the upcoming World Series Champions was in place - George Bell, Pat Borders, Tony Fernandez, Tom Henke, John Olerud, Dave Stieb. Fred McGriff would go a long way in helping them land Joe Carter and Roberto Alomar for the 1992 run. What. A. Team.


And what a card. Nowadays, a Topps intern just throws an Instagram filter on a card, like this - which was also in the trade: 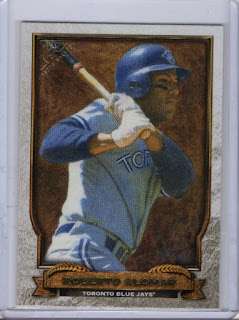 Right. Gallery is a thing again, as Topps flagship previewed before releasing as a stand-alone product in the Fall. I assumed my Anthony Alfords would be my only Gallery entries, but here we are with a third. It's nice. 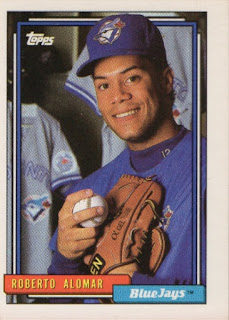 The Gallery wasn't the only Alomar, as this extraordinarily mis-cut 1992 Topps was there, highlighting the package for me - until we get to the final card in the post. This is one of my favorite Roberto Alomar cards, pictured as a Blue Jay for the second time on a Topps card (he was in Topps Traded in 1991), and rocking some baller threads. 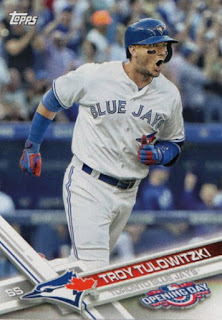 My Guy Troy Tulowitzki showed up as well, unfotunately decked out in the incredibly terrible 2017 Topps designed, lessened by the Opening Day branding. This is one of the least offensive 2017 Topps cards I've come across. 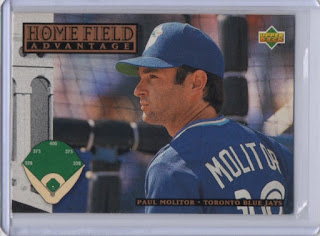 I was a huge fan of the Home Field Advantage cards from Upper Deck in 1994, a true golden era for eight-year old Roy-Z. The only one I remember having was Brady Anderson (?), so this was a welcomed addition. 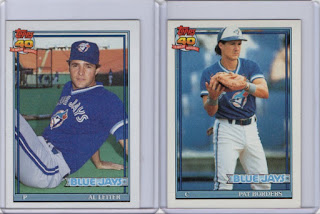 As were these '91 Jays. This design has grown on me in time, but it's hard to find a Pat Borders or a Blue Jays-branded Al Leiter card that I won't love.

But the true gem, in all of its junk wax glory came at the end in this sticky beauty: 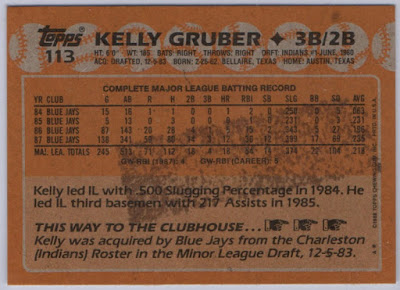 Another '88 Topps, this time gum-stained. The front is also miscut, but otherwise the card is in excellent shape. But man, that gum stain is just beautiful.

I liked this one enough to put it up next to my 1989 Fleer Bill Ripken.