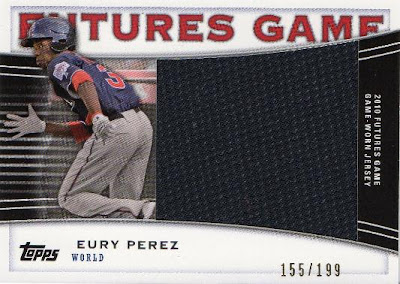 With the recent acquisition of a real job, I've been a little bit fast and loose with my eBay spending of late. Personally, I think it's justified, as I'm not spending a terrible amount, nor is there anything decent on the shelves to pass the time of late. One of the players I have been chasing after lately is Syracuse Chiefs CF/LF Eury Perez. 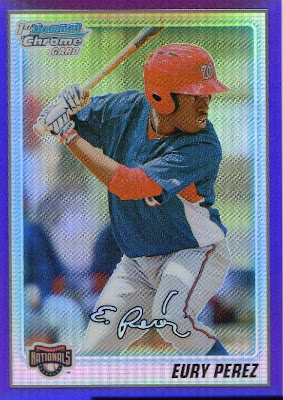 Eury is a very fast Dominican prospect in the Washington Nationals organization. Since he plays nearly every time we witness a game, and usually plays quite well, I've decided to start acquiring some of his cards.

The above Futures Game relic and the aside 2010 Bowman Chrome Purple Refractor (likely the best year for Bowman Chrome refractors) were had together for around $5. I am particularly fond of the purple refractor. Good looking card right there. 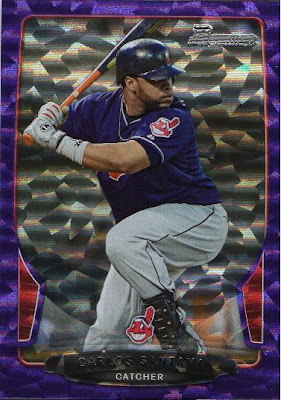 If you've followed this blog closely through the years, you've likely noticed by affinity for purple baseball cards. Even better are purple cards with some of my favorite backstops in the game. While I posted the Salvador Perez one already, it was with my old scanner, which has nothing on the premium quality of my new scanner and this 2013 Bowman Purple Ice of Carlos Santana. I've really been upping my Carlos Santana collection of late. This one might be my new favourite. 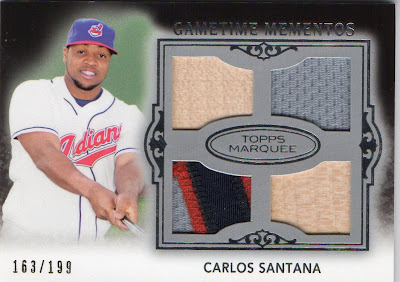 However, this one is quite excellent as well. The victim of a late afternoon "let's see whats ending on ebay in the next hour" mission, this patch/bat/uni relic from some year's Topps Marquee was had pretty easily due to an odd afternoon end time. 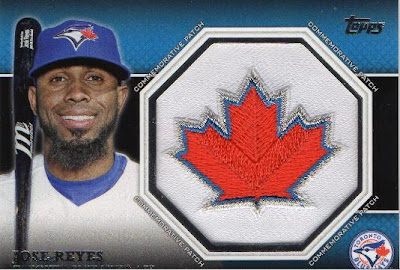 Speaking of patches being had easily, this one had had my eye on it since it's release in June. It's Jose, it's a patch, and it's a maple leaf. Win, win, win. This was another one with a strange ending time, which I believe was about 8am on Wednesday morning. It seems to me that the best time to grab cards is during strange end times like this, but unfortunately, it is a rarity that they are listed as such. 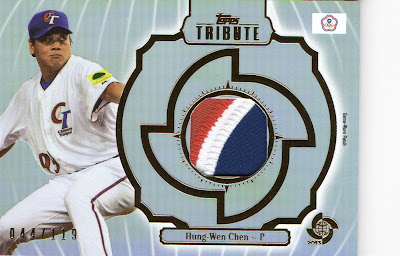 And what would one more patch hurt? Not much at all, I say. Thus, for your enjoyment, I present another 2013 Tribute World Baseball Classic patch. This one is of Team China-Taipei's Hung-Wen Chen, who was also with the team in previous WBCs. This was had for around $7 (that's just a guess), which was surprising as Taipei cards usually seem to do quite well on the 'bay. This is the basic refractor version, but features a very nice three-colour patch from the Taipei jersey.

Yet as you can see from the title, this is only part one. It's not that Part 2 will blow you away, but it those "pieces" haven't yet arrived, nor are they baseball cards. So, you know, for the sake of being consistent, you may have to wait another day.