On Cyber Monday, an interesting deal popped up at Dave & Adam's Card World:

Super 12-pack box? Neat! What I thought I was buying was something like a hobby box for a retail price, but what a super box really is, is a bit different.

You see each box (I grabbed two for a total of $40) contained 12 rack packs with three packs each and a bonus Red, White & Blue PRIZM pack in each.

So, yeah. That's a lot of cards for $40. And what it comes down to, manual labor-wise, is opening 24 rack packs, three foil packs within each (72) and additional 24 packs of RWB PRIZM parallels.

So if you're ever in the need to mindlessly rip packs on a budget, that's the way to go.

I should also mentioned that I ripped these mostly in the dark with just the light of the TV illuminating the room as the dog had scratched his eye earlier in the day (he's okay now.)

Here's the numerous spoils of the boxes.

For a fun little extra, try and pick out at which point in the scanning process I figured out how to deal with my scanner cutting the edged off of everything. I think you'll be pleasantly surprised. 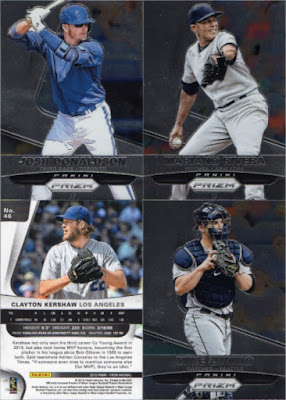 The base cards are...awful. I love Pacific Prism back in the day, on its simple, thin, light stock and shiny foil frontage. PRIZM, though? It's basically Topps Chrome with a worse design, no logos, and bad photos. But I wasn't in it for the base cards. 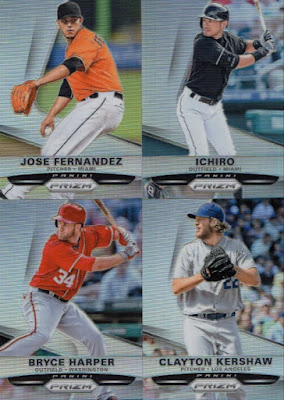 PRIZMS were about 1:2, or maybe that was inserts in general. For the most part, good players came out of the inserts, and these refractors look exponentially better than the cold steel/Kia dashboard feeling of the base cards. 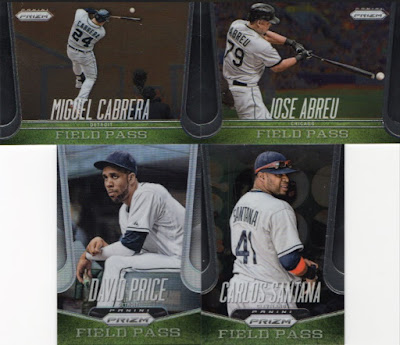 The Field Pass inserts are numbingly boring, but at least that Miguel Cabrera will go well into my DIRT collection. Each insert has a Prizm parallel, especially with colors (I think?) and again, make the cards so much better to look at. 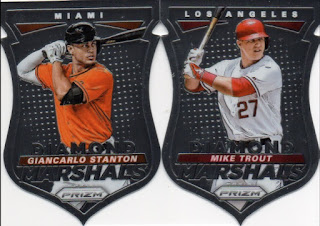 The Diamond Marshals inserts are very solid die-cut set, shaped like a badge. Goose Gossage and Brian McCann are not in this set, despite their constant attempts to police the sport.

Agian, the refractor version is much, much better.

Around this point I decided that the key to making any Panini Prizm card look good it to have a colourful uniform in the photo. The Late 90s teal Mariners uniform is a perfect example of this, as is the Giancarlo Stanton Marlins uni above. 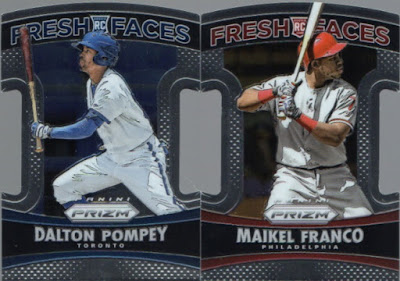 The Fresh Faces/please like our Rookie Card logo insert is fine enough. These must have been a bit more rare, as only three fell out of the two boxes. You'll see the third later.

I've collected Team USA cards in the past, but I could go without yet another Alex Gordon USA insert. It was 10 years ago, man. Move on. 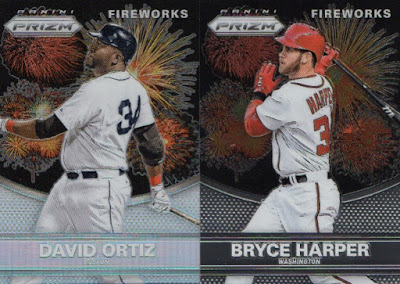 The Fireworks took an old Pacific Prism (~2000) idea and translated it into a modern chromiumed insert and...let's just say there was plenty lost in translation. This could have been great but are, well...fine.

Not on to the refractors PRIZMSZ. 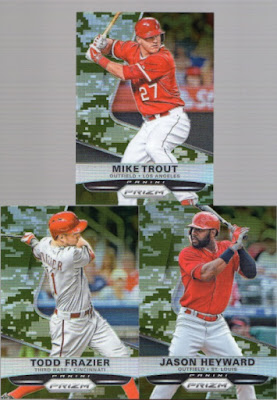 Camouflage! Are you sick of these yet? Yeah, so is everyone else.

I don't know what these are named, but the Bautista was the best-looking card in the box(es). I didn't even remember I had pulled the Kazmir until I scanned all of the cards. I just wanted it to be over by this point. 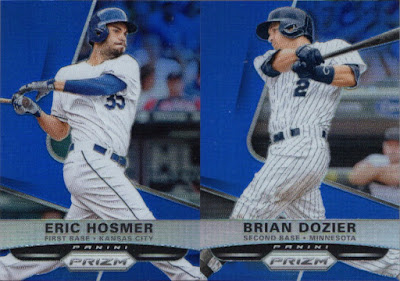 Blue! After taking a o=look at the coloured Prizms, I have to wonder why the would even make the base chromers. These are /75, I think. 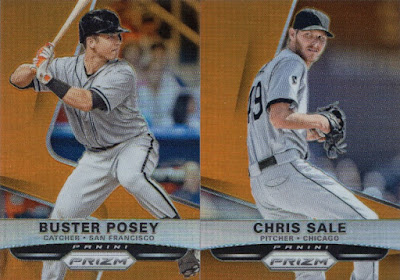 Orange! Card producers currently think orange is a good idea. On anything other than a Giants, Orioles or Marlins card - it isn't. 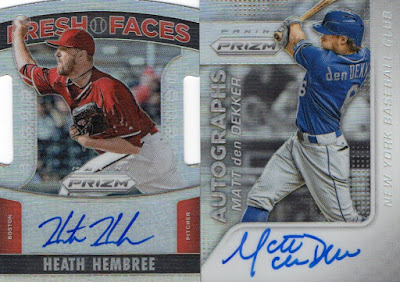 Hey, autographs! They're both terrible. It could have been worse. A meteorite could have struck the house at this point.

As much as a pain in the ass it was to open all of these packs, jamming all of these on to the scanner bed that cuts off the edges was even worse. Hopefully that's remedied. Oh, wait. 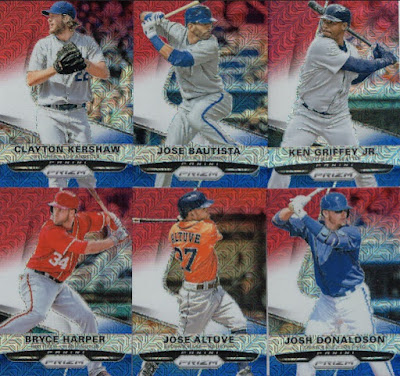