i checked out my cards: the oldest of friends 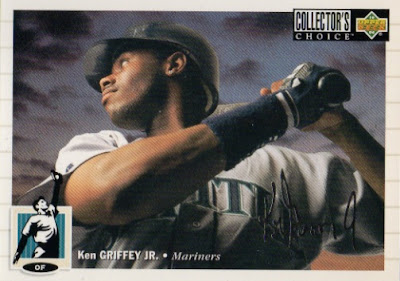 Back to it. This is the 3rd Edition of "i checked out my cards 2017" Black Friday binge, where I hit the core players in my collection: Roberto Alomar, Carlos Delgado, and Ivan Rodriguez. Previous entries here and here. It's an Alomar-heavy crop, so if you don't like Hall of Fame second baseman, just leave. No one will miss you.

On to the cards. 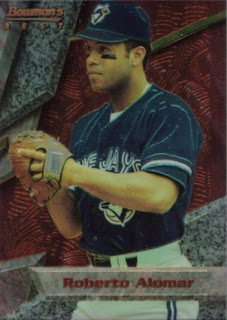 The original Bowman's Best (1994) was basically a cacophonous version of Topps Finest, which was a huge hit in 1993 and the original high-end set. I don't remember their releases, but I can imagine they were hyped up back then. Bowman's Best had kind of a granite countertop thing going on beneath the chrome, which as a (very) young geologist, I appreciated. 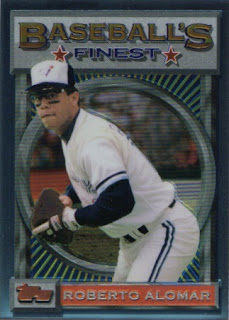 The original Topps Finest was solid, but the design certainly hasn't aged well. There were parallels back then, of course, like this blue one (1 of 5,000!) featuring Alomar in the white-paneled Jays cap. Superb. 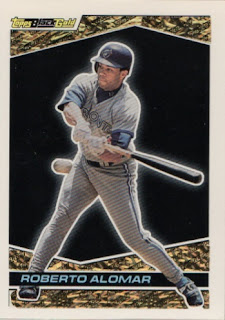 Topps of 1993 is an important set to me, not so much because I like it now, but because its the first cards I remember opening. The Blue Jays had just one their first World Series in 1992, and Alomar was a star. Black Gold cards were the first insert I remember aside from regular old Topps Gold, but they were the first with the hologram-style foil. Nearly 25 years later, I still love the Black Golds.

This time through my COMC Black Friday binge, there was something I was searching for in my Alomar collection. 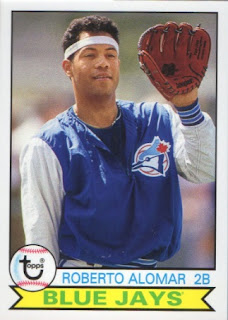 Topps is still producing Alomar headband cards, such as the Archives offering from 2016. Not my favorite Alomar, but I'll take any one of him in the headband. 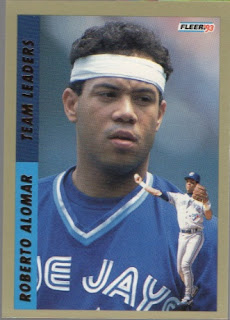 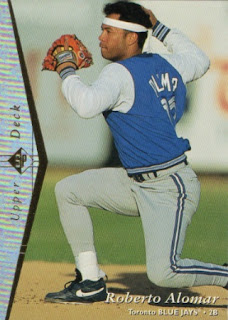 And my current favorite, this 1994 Collector's Choice Up Close & Personal. 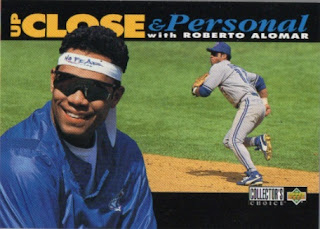 I'm pretty sure I pulled this card as a kid, but I was about eight years old and those corners are going to straighten themselves. I've replaces a few gems from my childhood.

This isn't one of them: 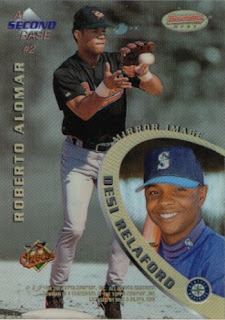 Ewww, Orioles. Bowman's Best was much more cleaned up and impressive in 1995, and while it's hard to tell from the photo, the quad-player offering is actually a refractor. Desi Relaford didn't make much of himself, but on the back is Craig Biggio - another Hall of Fame second baseman and Luis Castillo, who did have a nice career.

Okay, one more Alomar for the road. 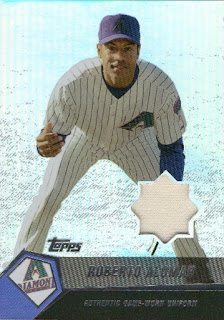 I would have to put Diamondbacks Alomar as my No. 2 to Blue Jays Alomar, as his cards with them are pretty rare and given his long career, seems almost ridiculous. I've had my eye on this one for a few years. I must have been the only one who wanted it. That's fine.

On to Carlos Delgado! You might want to put your sunglasses on now because it's about to get really shiny around here. 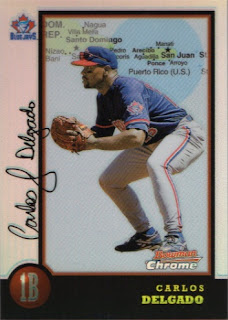 I've always wanted an International Refractor, and a 1998 Bowman Chrome of one of my favorite Jays is a great place to start. Delgado is easy to collect in that way: his cards are affordable, he never played in an era of low print runs, and there's not a whole lot of competition for him. It leads me to pick up cards I wouldn't normally jump on, ones I just admired in black and white from the pages of Beckett, like this 2000 PACIFIC Prism (with an "S", that's how you know its good) Drops Silver parallel. 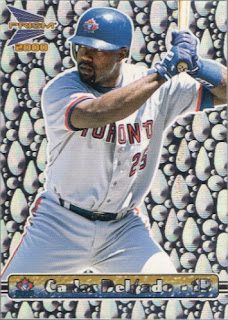 And man, is it heckin' cool in-hand. Prism from 2000 was a pretty set regardless, but this background pattern is especially fun. Shall we taste the rainbow? 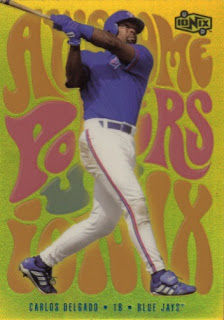 Upper Deck (UD if you were a cool kid) Ionix was a fun one-and-done brand in 2000. The bend of this card gave it a good scan, but in-hand kind of looks like how a card would look if you somehow turned SURGE into cardboard and printed baseball players on it. Which fits into the style at the time. 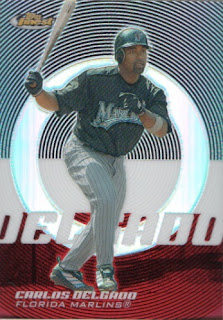 LOUD. Delgado spent just one season with the Marlins, but it was a very good season in which he hit 33 HR and drove in 115. As a 1B, the analytics didn't love him, and he only put up an fWAR of 3.3.

Also that year, the Detroit Tigers were very bad, but they had a very good All-Star catcher that season in Ivan Rodriguez. There's no Tigers cards to show here, just Ranger - but they are magnificent. We'll start with this absolutely perfect 1994 Topps Stadium Club where he's deck out in the Tools of Ignorance: 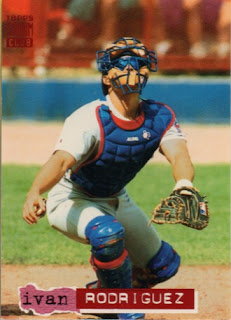 It doesn't get much better than that. TSC 1994 is a set I will have to complete someday. It's not as artful as some other TSC offerings, but the photography remained outstanding and the plastic-personalization name labels was so fitting for 1995. 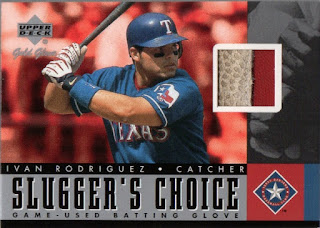 In 2001, Pudge won his 10th Gold Glove. Upper Deck was getting more interesting with the memorabilia cards by that time, and the price was right for me, 16 years later, to grab this game-used batting glove card.

Okay. You've made it this far, and you deserve something great. I give you: 1994 Upper Deck Ivan Rodriguez - Electric Diamond parallel! 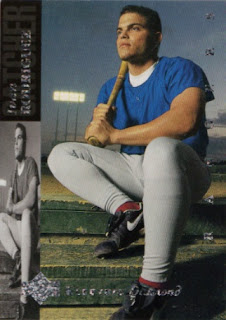 Pretty cool, right? Pudge was so popular by 1994 that he warranted one of the best-looking cards in the set. However...

Are you ready? Good. 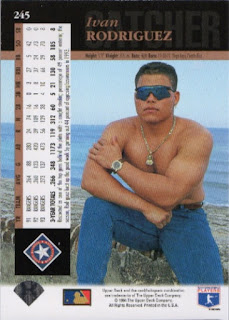